Carrots, Beets, Lemons... I love all types of juices, especially first thing in the morning. Juices keep you healthy and get you started in the morning. The best juices come from slow juicers. They keep the juice from oxidizing too fast and slow juicers are a little more pleasant to the morning ear. 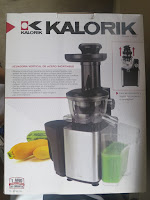 The juicer I had was the Kalorik FE 40764 SS. It isn't the best, it's kind of loud and under powered. Initially it worked great. Over time it would get jammed more often, almost as if the engine was loosing power. Either way, I was more or less happy with its less than perfect operation. Eventually - after less than a year of operation, it broke down. I didn't have a warranty anymore because it sat in a box for a long time after purchase.

This post is not about how happy I was, it is about how angry I got when I tried to fix the machine. I love tinkering with machines and seeing how they work - sometimes fixing them. I thought that I could try and fix this machine as well, saving space in some distant landfill. 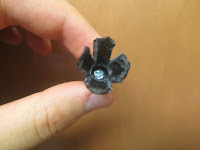 As soon as I started taking it apart, I knew this was going to become an uphill battle. But that's ok, because I love to tinker with machines. I turned the machine upside down. What do I see? Four screws that hold the bottom in place. Two screws are regular Phillips screws and two NON-STANDARD screws!

They were some sort triangular shape screws. I've taken a lot of things apart in my life and I have never seen these, even Wikipedia does not know about them.

Was there any reason to do that? Was there any reason why the other identical two slots could take a Phillips screw but these two slots had to have a special head? That is considering the sizes and functions of ALL four screws were identical. The answer is, of course, NO! These special screws were made to prevent me from opening the machine. Well, why couldn't they just have a warranty seal like everyone else so they know when I open the machine. That is, of course, so that I would not attempt to actually fix the device even after the warranty expires. 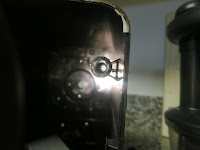 It is kind of hard to see, but the screws were installed so deep in a cone shaped socket that most of my screw drivers wouldn't fit in. I didn't see any logical reason as to why it had to be like that... but OK, I'm not a mechanical engineer. Though, I've seen other similar machines where the cone shape and depth were unnecessary. That didn't stop me, I took out my drill and dug through the plastic freeing the motor from the rest of the encasement. 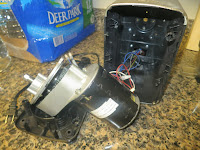 At first glance of the guts I couldn't figure out what was wrong with the machine. The symptom was weird. I could hear the motor turning and if I applied no pressure to the machine (no vegetables) it would turn the mechanisms just fine. But, it could not provide any force to crush even a blueberry. It would get stuck and make a clunking sound as if the gears were raw. That confused me as I didn't think vegetables required that much force.

Anyway, the answer lied in the transmission. The transmission is a large silver container that is on top of the motor. It receives input from the motor, reduces the speed, and increases the torque. Cool, this is the general schematics of the gears. I should tell you that I'm not a mechanical engineer so my drawing is a best guess of how to demonstrate the mechanism. Arrows are showing how the torque is transmitted. 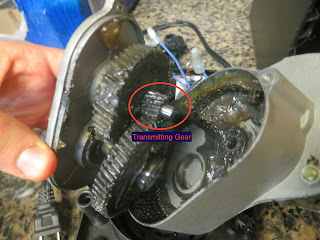 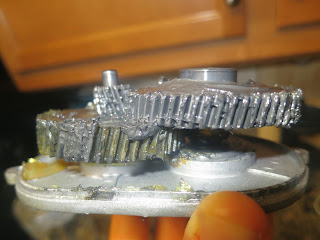 As you can see, not a lot going on. Lots of grease and four gears including the motor. The picture is a little deceiving. The transmitting gear is not actually attached to the large gear. It is, in fact, holding on by the sticky grease for the camera. The torque is transmitted via a flat screw driver type mechanism. The large gear has this bar where the transmitting gear slips in.

Cleaned up of the grease, here's what the top large gear looks like. Specifically the attachment used by the transmitting gear. 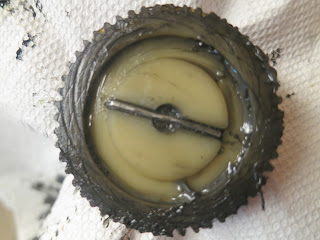 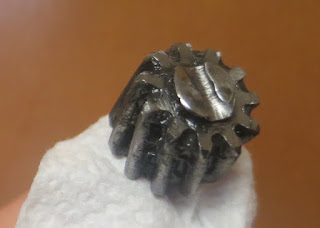 Let's have a look at that from another angle: 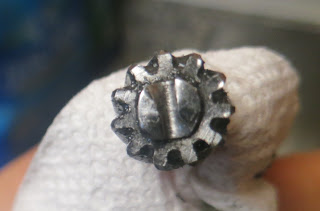 Any cat can see that this would have happened sooner rather than later. Even a little, microscopic space between the bar and the gear head walls would've caused movement that would eventually bend the walls and refuse to provide enough force. I would assert, that it would not add significant manufacture cost to weld these gears or to have a single indivisible part. It would've even been better to have four metallic bars (think IKEA furniture) keeping the gears together.

I have to conclude that this gearing mechanism was made to fail and timed carefully to most likely to fail after the warranty has expired. Electric motors are incredibly durable. There are cars and trains made with them and those last a long time. I'm just crushing some poor vegetables, there is no reason that anything metallic should fail in that environment. This is most definitely the case of Planned Obsolescence as very well documented by this film. This is a very SHAMEFUL practice, Kalorik!
Posted by nologic at 17:42